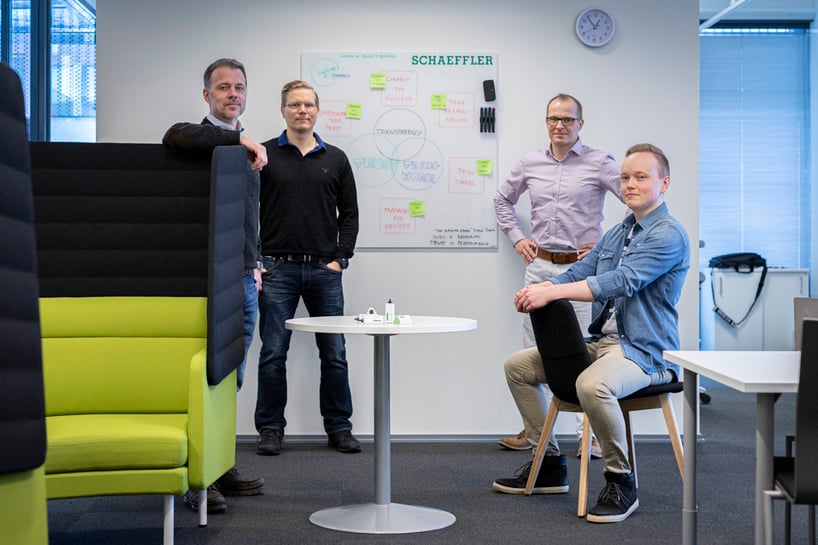 When the global automotive and industrial supplier Schaeffler launched an innovative hit product, their product development unit in Jyväskylä played a key part. The team, which develops new solutions for industrial condition monitoring, consists of top professionals who value the possibility of being in lockstep with a global environment working from Jyväskylä.

It all started in 2018, when Schaeffler decided to establish an Industrial IoT Solution Center here in Jyväskylä for developing a new OPTIME product for Schaeffler’s Industry 4.0 division. Senior Vice President of Industry 4.0 Rauli Hantikainen had previously developed similar functions globally. He knew how Jyväskylä could be a great environment for developing new technology.

– They analyzed the situation and found that Finland is particularly well suited for these sorts of projects with its globally competitive technology ecosystem: there are lots of people specializing in mesh networks and electronics and IoT platforms, for example. By basing a team in Jyväskylä, we were able to unite the local development unit, the technology ecosystem and the pilot customers in one place, says Jarno Suomela, Vice President of Solutions Business Development and one of the first employees of the Jyväskylä IoT Solution Center.

Suomela, who had previously worked at Metso and Landis+Gyr in Jyväskylä, became interested in joining the new development unit based in his home town.
– We had lived in Switzerland with my family for a short while. In the end, working for Schaeffler from Finland was a perfect solution for me, because we are so strongly bound to Jyväskylä: our friends, the children's schools, hobbies, grandparents and, of course, our home are all here, Suomela explains.

A hit product in record time

Initially, the team was focused at developing OPTIME – an easy to use condition monitoring system for industrial machines. Companies can implement it cost-effectively and on an unprecedented scale, thus avoiding production downtime due to machine malfunctions.
– Typically, it would take 3-4 years to develop a solution like this, but OPTIME was released only a year from the start of the project, Suomela points out.
– Not only is the product technologically innovative, it has also been a market hit despite the coronavirus pandemic.

According to Suomela, the secret behind the exceptionally fast development has been close cooperation with Schaeffler's German teams, technology partners and the Finnish pilot customers, as well as strong support from the management in Germany.
– The availability of extremely multi-skilled personnel in Jyväskylä has also been a great plus. We had a stroke of luck putting together such an experienced team in a short time in the midst of the pandemic, Suomela praises. 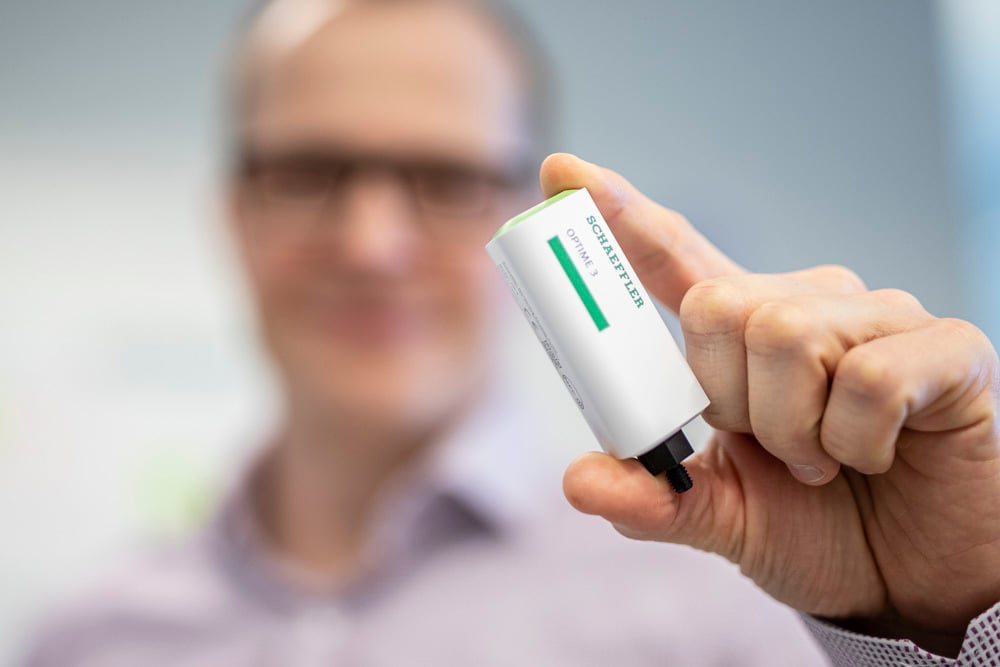 As a result of the Jyväskylä-led development project, OPTIME has so far been awarded the Industry 4.0 Innovation Award 2020 by the German Electrical and Electronic Manufacturers' Association (ZVEI) and the Industry 4.0 Standardization Council, as well as receiving second place in Schaeffler's internal global innovation competition in 2020. Most recently, OPTIME was granted the Red Dot Design Award in two categories, Industrial equipment and Smart Products.

The Jyväskylä unit already employs almost twenty people and the future looks promising.
– We have become an important part of our Service Solutions business, contributing not only to technological development, but to business development as well. We are currently further developing OPTIME, and simultaneously working on completely new development projects with the same methodology.

Suomela believes that family and recreational opportunities are the most important reasons for many to move to or remain in Jyväskylä.
– Exercise is an important part of life for myself and my whole family, for example. As a parent of teenagers, I appreciate that their hobbies are close by. Everyday life is less complicated and the quality of life is just better, Suomela sums up.

– On a personal level, I also feel that I’ve developed enormously professionally and as a person by finally finding time to combine my work in international management with postgraduate studies at the University of Jyväskylä's Executive MBA program, Suomela reflects.

Part of a truly global company

Jukka Elfström, who originally moved to study in Jyväskylä from Siilinjärvi in Eastern Finland, is satisfied that he and his family did not have to consider moving to Helsinki to get a meaningful job in an international company.
– I worked for more than 10 years in various positions at Moventas, a wind turbine engineering firm, and about a year ago I made the jump to Schaeffler, Elfström says.
– In both companies, I’ve been motivated by the work and felt I’m professionally progressing in a direction I want. There has always been something new to look forward to

Elfström was intrigued by the Schaeffler’s strong market position and its brand, as well as the truly global operating environment: a local organization in virtually every country and more than 80,000 employees globally.
– My role as Solutions Manager is to be close to customers and keep an ear to the ground for new needs and notions coming from them. Customers are very interested in building and piloting new products and Finland is a great environment for this type of cooperation, Elfström says.

“Jyväskylä has its own support network”

Eetu Takala, representing the younger generation of the product development unit, got his Master’s degree in Electrical Engineering in the bigger Finnish city of Tampere and then returned to his hometown, Jyväskylä. The return was helped along by a relationship formed already during his studies with Jyväskylä-based Aidon, a supplier of energy measurement systems.
– Tampere is a nice city, but my support network was here: my family and friends, and as it turns out, my to-be employer. So it was easy to return, Takala laughs.

Takala is now a systems integration testing engineer at Schaeffler, working mainly from his home office in Palokka, a suburb of Jyväskylä. He is constantly in contact with customers around the world, especially in Asia.
– My language skills have improved a lot, since I’m practicing virtually every day, he remarks. 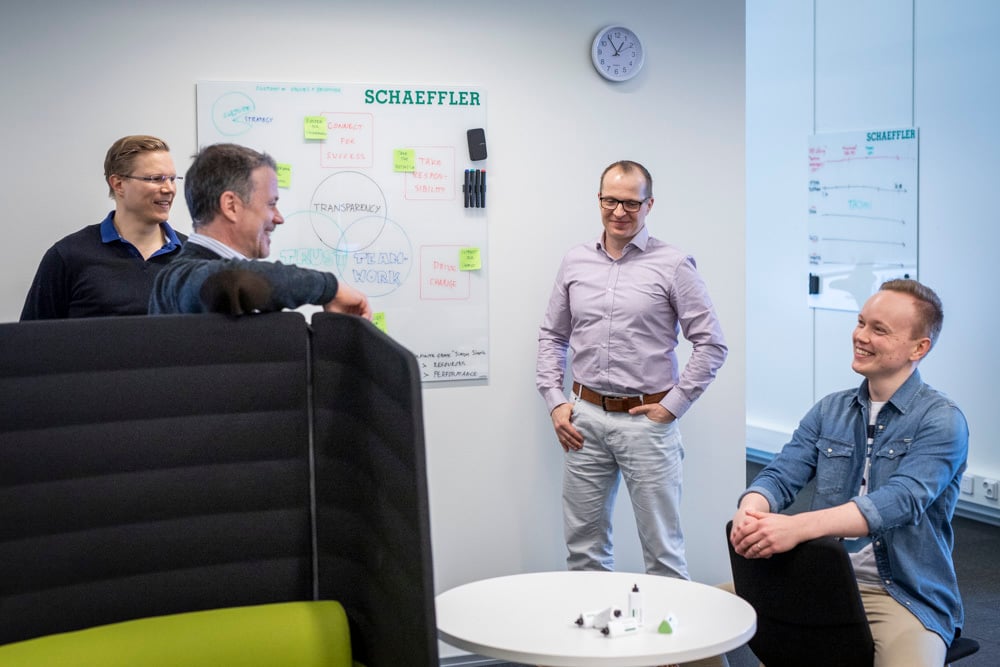 Just the right quality of life

Mika Niemi, who works as the Head of R&D Quality at Schaeffler’s Jyväskylä unit, moved to Jyväskylä from Stockholm with his family a year ago.
– In total, we had been abroad for almost twenty years and consecutively for the last 13 years, first in Japan and then in Sweden. Returning to Finland had been on my mind for some time, Niemi recounts.

Jyväskylä was a clear choice because my partner has family there and a new job in an international position at JAMK University of Applied Sciences. Niemi originally applied for another position at Schaeffler, but during the recruitment process he was offered the position of Head of R&D Quality.
– The role in the organization had just been created and to boot, it entailed working with new innovative solutions, which made the decision an easy one. The unit has grown rapidly, and we have a really diverse and first-rate set of competencies, Niemi says.
- It has also been surprisingly rewarding to communicate at work in my own language after a long time.

He feels that since his return, the quality of life in particular has improved.
– We appreciate the peace and closeness to nature with my wife. The summer house is close by and we can go there regularly.
– We have everything we need for remote working and the flight connections to Europe are good enough, Niemi characterizes. – And you’ll be hard-pressed to find a traffic jam in Finland, at least in our opinion, he laughs.

– Jyväskylä is just the right size. There are great option for outdoor activities and recreational opportunities. We lack nothing, Niemi sums up.

Schaeffler Group – We pioneer motion
As a leading global supplier to the automotive and industrial sectors, the Schaeffler Group has been driving forward groundbreaking inventions and developments in the fields of motion and mobility for over 70 years. With innovative technologies, products, and services for CO₂-efficient drives, electric mobility, Industry 4.0, digitalization, and renewable energies, the company is a reliable partner for making motion and mobility more efficient, intelligent, and sustainable. The technology company manufactures high-precision components and systems for powertrain and chassis applications as well as rolling and plain bearing solutions for a large number of industrial applications. The Schaeffler Group generated sales of approximately EUR 12.6 billion in 2020. With around 83,300 employees, Schaeffler is one of the world’s largest family companies. With more than 1,900 patent applications in 2020, Schaeffler is Germany’s second most innovative company according to the DPMA (German Patent and Trademark Office).